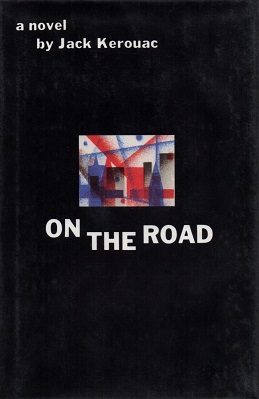 This is the front cover art for the book On the Road written by Jack Kerouac. The book cover art copyright is believed to belong to the publisher or the cover artist (wikipedia.org)

On the Road is a 1957 novel by American writer Jack Kerouac, based on the travels of Kerouac and his friends across the United States. It is considered a defining work of the postwar Beat and Counterculture generations, with its protagonists living life against a backdrop of jazz, poetry, and drug use. The novel is a roman à clef, with many key figures of the Beat movement, such as William S. Burroughs (Old Bull Lee), Allen Ginsberg (Carlo Marx), and Neal Cassady (Dean Moriarty) represented by characters in the book, including Kerouac himself as the narrator Sal Paradise.

The idea for On the Road, Kerouac's second novel, was formed during the late 1940s in a series of notebooks, and then typed out on a continuous reel of paper during three weeks in April 1951. It was published by Viking Press in 1957.

The New York Times hailed the book's appearance as "the most beautifully executed, the clearest and the most important utterance yet made by the generation Kerouac himself named years ago as 'beat,' and whose principal avatar he is." In 1998, the Modern Library ranked On the Road 55th on its list of the 100 best English-language novels of the 20th century. The novel was chosen by Time magazine as one of the 100 best English-language novels from 1923 to 2005.