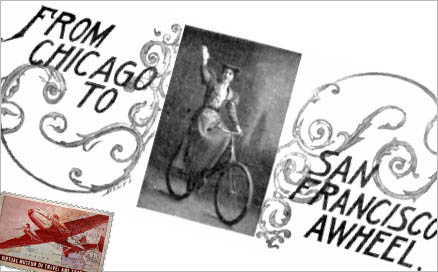 In spite of the opposition of every friend and relative who was on hand to register a protest (and those at a distance objected by mail) I proceeded with my preparations for riding awheel from Chicago to San Francisco. They were few and simple, consisting mainly of a suitable skirt, and in having heavy soles put on my shoes. A change of underwear, a few toilet articles, and a clean “hanky” I strapped on my handle-bars, and a pistol, which I borrowed, I put in my tool-bag, where it would be hard to get at it in case of need. And so one morning in May I started midst a chorus of prophecies of broken limbs, starvation, death from thirst, abduction by cowboys, and scalping by Indians.