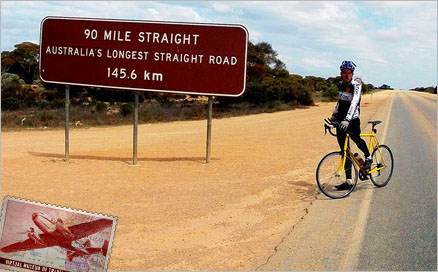 Blood, sweat, nerves, and money have finally paid off – two years of intense training and meticulous planning have had a purpose: The Fastest World Circumnavigation on a Bicycle. I have done it! I can proudly say that a great team has helped me in accomplishing this record. I also want to thank all my sponsors who trusted in me from the beginning. An amazing journey ended for me on New Year’s Eve with my arrival back to where I started, Berlin. I had bicycled 105 days, faster than any man around the globe, and broke the world record! This accomplishment made me the happiest, proudest, and most grateful person on earth. For somebody who had never really bicycled before 2008, I have accomplished more than I ever could have imagined. I biked most of the Pan-American Highway, peddled up some of the highest passes on Earth in Tibet, crossed the Andes more than once and now I have completed my most difficult challenge yet, a record breaking bicycle trip around the world.

Over the past few years I have cycled more than 65,000 km. Bicycling is still the most beautiful way to see the world in my opinion, and still my tool of choice to push myself closer to my limits, but lately I have been making few new plans. In the future I will still be cycling the world, but I also have other ideas on how to get around. There is something already on my mind …