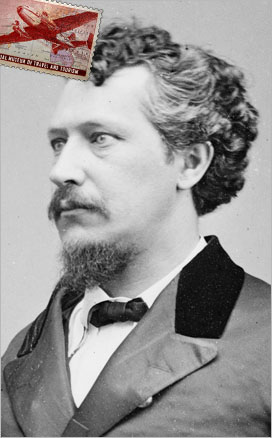 George Francis Train (1829-1904), merchant and entrepreneur, was born on 24 March 1829 at Boston, Massachusetts, United States of America, son of Oliver Train and his wife Maria, née Pickering. His parents and three sisters died in a yellow fever epidemic in New Orleans in 1833 and he was raised in Waltham, Massachusetts, by his maternal grandparents, who were staunch Methodists. Train remained a life-long total abstainer from alcohol and tobacco. From the age of 16 he worked in Boston and Liverpool with the White Diamond Line of Enoch Train, his father's cousin, and gained experience of both American and English commerce. On 5 October 1851 he married a Southern belle Wilhelmina Wilkinson Davis; on 23 May 1853 they arrived in Melbourne in the Bavaria.

The flamboyant Train was representative in many ways of the scores of American merchants attracted to Australia by the gold rushes. Melbourne partly owes its nineteenth-century reputation for being Americanized to men like him and his partner Ebenezer Caldwell, a respectable New England sea captain. As few left any account of their experiences, the letters that Train wrote to American newspapers are of much value, revealing the refreshingly different reactions of an American republican to Australian conditions. He and Caldwell generated enthusiasm for the Melbourne Chamber of Commerce and the Exchange and continually stressed the need for more public and private enterprise. Train wrote several reports for the chamber; he drafted its motion in favour of the unrestricted entry of Chinese; and with other Americans he promoted a land policy modelled on United States principles. He usually eschewed politics and, despite persistent rumours to the contrary, his eloquent advocacy of the virtues of republicanism was reserved for Independence Day speeches and for his American readers.

By putting substantial warehouses at each end of the new railway from Sandridge to Flinders Street, Caldwell, Train & Co. made it easier for passengers of the White Star Line of Liverpool, for which they were agents, to transfer themselves and their luggage from port to city. The partners were prominent in organizing a volunteer fire brigade; they imported clothing, guns, flour, building materials, patent medicines, mining tools, coaches and carts, wagons and buggies. After Caldwell left Melbourne in the Red Jacket in August 1854 the firm, now G. F. Train & Co., continued to make money and traded until 1858. The Argus credited Train's 'energy, spirit and restless activity' with 'stirring up a spirit of emulation' among Victorian merchants and so succeeding in 'vitalising our whole commercial system'. C. S. Ross remembered him in those days as 'full of indomitable energy, faultlessly dressed, always swinging an elegant cane in his hand; his jaunty air, breezy manner, and genial volubility made him a general favorite'.

Train's wife returned to Boston in 1854 and gave birth to a daughter. He decided to rejoin her and left Melbourne in early November next year, travelling by way of the Orient and the Middle East. His accounts of the trip were sent to the New York Herald, were published in 1857 with his Australian letters as An American Merchant in Europe, Asia, and Australia … and were so well received that Freeman Hunt of the Merchants' Magazine sent him to Europe to report on economic and social conditions. In 1859 in New York he published Spread-Eagleism, which included speeches he had made at banquets in Melbourne. In the next few years Train established horse-drawn tramways in Birkenhead and London and played an elusive role in the financing of the Atlantic and Great Western Railroad and the Union Pacific in the United States. His noisy support of the American Union harmed his English enterprises. In 1870 he went on a second world trip which he claimed gave Jules Verne the model for Around the World in Eighty Days. Insolvent at 47 and his presidential ambitions unsupported, he turned to lecturing as his main source of income.

Train's enthusiastic pursuit of 'causes', ranging from Fenianism to women's suffrage, resulted in several imprisonments in Britain and America. 'Ubiquitous and irrepressible' he toured the world again in 1890 and 1892. His wife, from whom he had lived apart since 1872, predeceased him in 1879. He died in New York on 18 January 1904, two years after publishing My Life in Many States and in Foreign Lands. He was survived by three of his four children.
http://adb.anu.edu.au/biography/train-george-francis-4745