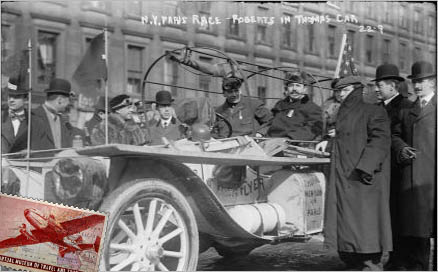 The 1908 New York to Paris Race was an automobile competition consisting of drivers attempting to travel from New York to Paris. This was a considerable challenge given the state of automobile technology and road infrastructure at the time. Only three of six contestants completed the course. The winner was the American team, driving a 1907 Thomas Flyer.

In 1907 the Peking to Paris automobile race had inspired an even bolder test of these new machines. The following year the course would be from New York City, USA, to Paris, France, with a planned 150-mile (240 km) ship passage from Nome, Alaska, across the Bering Strait to East Cape, Siberia.

The race, which was the first of its kind among automobiles, commenced in Times Square on February 12, 1908. Six cars representing four nations were at the starting line for what would become a 169-day ordeal (making it, in terms of time taken, still the longest motorsport event ever held). Germany, France, Italy, and the United States participated, with the Protos representing Germany, a Zust representing Italy, three cars (De Dion-Bouton, Motobloc, and Sizaire-Naudin) representing France, and a Thomas Flyer representing the United States. At 11:15 AM a gunshot signaled the start of the race. Ahead of the competitors were very few paved roads, and in many parts of the world no roads at all. Often, the teams resorted to straddling locomotive rails with their cars riding tie to tie on balloon tires for hundreds of miles when no roads could be found.

The American Thomas Flyer was in the lead after crossing the United States and arriving in San Francisco in 41 days, 8 hours, and 15 minutes. It was the first crossing of the US by an automobile in winter.

The route then took them to Valdez, Alaska, by ship. Then Thomas crew found impossible conditions in Alaska and the race was rerouted across the Pacific by steamer to Japan where the Americans made their way across to the Sea of Japan. Then it was on to Vladivostok, Siberia, by ship to begin crossing the continents of Asia and Europe. Only three of the competitors made it past Vladivostok: the Protos, the Züst, and the Flyer.

The wet plains of Siberia and Manchuria during the spring thaw made progress difficult. At several points, forward movement was often measured in feet rather than miles per hour. Eventually, the roads improved as Europe approached and the Thomas arrived in Paris on July 30, 1908, to win, having covered approx 16,700 km. The Germans, driven by Hans Koeppen, arrived in Paris four days earlier, but had been penalized a total of 30 days for not going to Japan and for shipping the Protos part of the way by railcar. That gave the win to the Americans with George Schuster (the only American to go the full distance from New York to Paris) by 26 days (still the largest winning margin in any motorsport event ever). The Italians arrived later in September 1908. 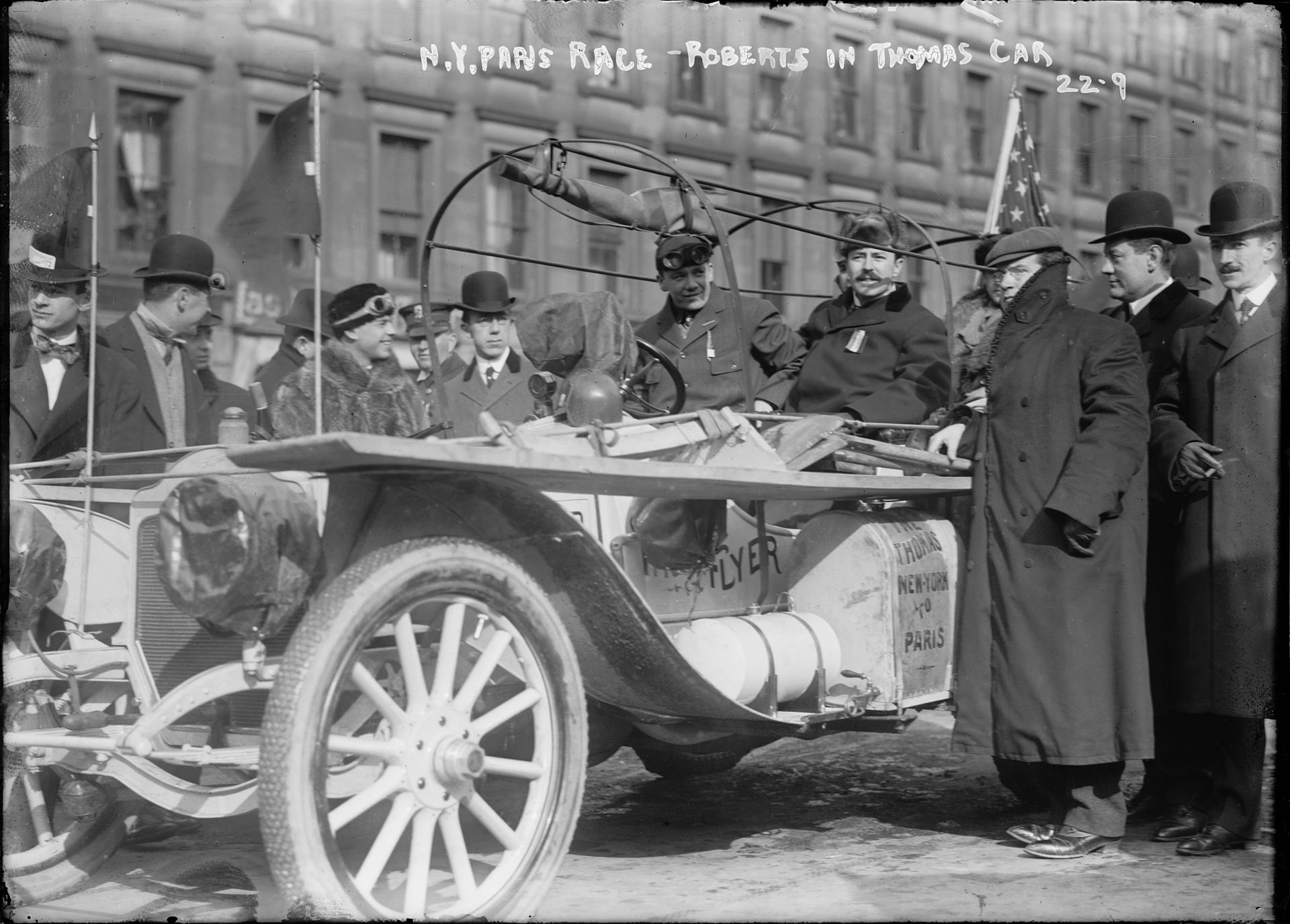 The race winners. Bain News Service - This image is available from the United States Library of Congress's Prints and Photographs division

The race was of international interest with daily front page coverage by The New York Times (a cosponsor of the race with the Parisian newspaper Le Matin). The significance of the event extended far beyond the race itself. Together with the Peking to Paris race which took place the year before it established the reliability of the automobile as a dependable means of transportation, eventually taking the automobile from an amusement of the rich to a reliable and viable means of long distance transportation for the masses. It also led to the call for improved roads to be constructed in many parts of the world.

The winning driver George Schuster was inducted into the Automotive Hall of Fame on October 12, 2010.

The winning Thomas Flyer is on display in Reno, Nevada, at the National Automobile Museum, alongside the trophy.