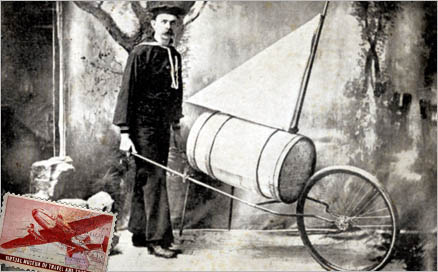 Alias-Pseudonimo-Pseudonyme: Colonial Jack; Sailor Jean
Nationality-Nazionalità-Nationalité: USA
Birth/death-Nascita/morte-Naissance/mort: 1873-1956
Means of transport-Mezzo di trasporto-Moyen de transport: On foot-A piedi-A pied
Geographical description-Riferimento geografico-Référence géographique: USA
Internet: http://www.newenglandhistoricalsociety.com/colonial-jacks-9024-mile-walk-around-america/
Additional references-Riferimenti complementari-Références complémentaires: Krohn J. A., The walk of Colonial Jack: a story of a long distance walker, Printed by the Winchester Star, 1910. Hyder W. D., In His Shoes, The True Story of Sailor Jean and Colonial Jack, Numismatist, Gennaio 2008.
Inscriptions-Iscrizioni-Inscriptions: Colonial Jack is walking and pushing his sphinx around the border of the United States, a distance of 9,000 miles, in 400 days (except sundays), starting from Portland, Me, June 1, 1908, and ending in Porland, Me.

He likes the old colonial dress, or, rather, that of the revolutionary period. He objects to pantaloons, and thinks that he can walk much easier in knee breeches. He wears the old-time cocked hat and wheels a contrivance of his own before him, box shaped, like a pyramid, mounted on a single bicycle wheel.

He took with him a formal letter from Mayor Leighton to the mayor of Portland, Ore, and promised to bring back a reply in 400 days. S. B. Kelsey, the assistant postmaster, sent a letter by him to the assistant postmaster at Portland, Ore, telling him to send him a Pacific coast salmon by "Jack" provided he thought it would be fresh when he got back to the Atlantic coast.
The Washington bee, 11.07.1908