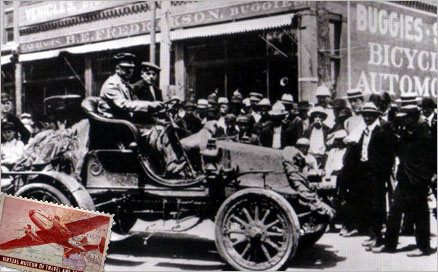 Horatio Nelson Jackson (March 25, 1872 – January 14, 1955) was an American physician and automobile pioneer. In 1903, he and driving partner Sewall K. Crocker became the first people to drive an automobile across the United States.

On May 23, 1903 the car was transported by ferry from San Francisco to Oakland and pointed eastward. But only 15 miles (24 km) into the journey, the car blew a tire. Jackson and Crocker replaced it with the only spare they had, in fact, the only right-sized spare tire they could find in all of San Francisco.

On the first night of the journey they discovered that the side lanterns were too dim. On the second night, they stopped early in Sacramento and replaced them with a large spotlight mounted on the front of the Vermont. The duo was also assisted in Sacramento by bicyclists who offered them road maps. Jackson was unable to buy a new tire, but purchased some used inner tubes.

Going northwards out of Sacramento, the noise of the car covered the fact that the duo's cooking gear was falling off. They were also given a 108-mile (174 km) misdirection by a woman so that she could send them to the spot where her family could see an automobile.

The rough trek towards Oregon required them to haul the car across deep streams with the block and tackle. Somewhere along this route, Jackson lost a pair of his glasses. Items continued to be lost, including another pair of Jackson's glasses. They were also forced to pay a $4 (equivalent to $114 in 2019[3]) toll by a land-owner in order to cross his property on a "bad, rocky, mountain road" as Jackson described it. When their tires blew out they were required to wind rope around the wheels. Jackson did manage to find a telegraph office and wired back to San Francisco for replacement tires to be transported to them along the journey.

Reaching Alturas, California, Jackson and Crocker stopped to wait for the tires. They offered locals rides in the car in exchange for a "wild west show". When the tires failed to materialize, however, they continued on after a three-day wait.

On June 6, the car broke down, and they had to be towed to a nearby ranch by a cowboy on horseback. Crocker made repairs, but a fuel leak caused them to lose all of their available gasoline, and Jackson rented a bicycle for Crocker to travel 25 miles (40 km) to Burns, Oregon, for fuel. After suffering a flat tire on the bicycle, he returned with 4 US gallons (15 l) of fuel (which Jackson complained cost him "nearly twenty dollars"), and they returned to Burns to fill up.

On June 9, outside of Vale, Oregon, the Vermont ran out of oil. Jackson walked back to the last town to get oil, only to discover eventually that they had been stopped only a short distance outside of Vale. The next day they arrived in Ontario, Oregon, where supplies waited for them.

Somewhere near Caldwell, Idaho, Jackson and Crocker obtained a dog, a Pit Bull named Bud. As it turns out, Jackson had wanted a dog companion since Sacramento. Newspapers at the time gave a variety of stories of how Bud was acquired, including that he was stolen; in a letter to his wife, Nelson said a man sold him the dog for $15 (equivalent to $427 in 2019). It turned out that the dusty alkali flats the travelers encountered would bother Bud's eyes so much (the Vermont had neither a roof nor windshield) that Jackson eventually fitted him with a pair of goggles. At one point, Bud drank bad water and became ill, but survived.

At this point, the trio became celebrities. The press came out at every stop to take their picture and conduct interviews. At Mountain Home, Idaho, citizens warned them that the Oregon Trail was not good further east, so Jackson and Crocker veered off their original course along the southern edge of the Sawtooth Mountains. At Hailey, Idaho, Crocker wired the Winton Company for more parts.

On June 16, somewhere in Idaho, Jackson's coat, containing most of the travelers' money, fell off and was not found. At their next stop, Jackson had to wire his wife to send them money to Cheyenne, Wyoming. Between June 20 and 21, all three of them got lost in Wyoming, and went without food for 36 hours before finding a sheepherder who gave them a meal of roast lamb and boiled corn. Before reaching Cheyenne, however, the car's wheel bearings gave out, and Crocker had to talk a farmer into letting them have the wheel bearings of his mowing machine.

The travelers eventually reached Omaha, Nebraska, on July 12. From there on, they were able to use a few paved roads, and their trip was much easier. The only mishap happened just east of Buffalo, New York, when the Vermont ran into a hidden obstacle in the road and Jackson, Crocker, and Bud were thrown from the car. They arrived in New York City on July 26, 1903, 63 days, 12 hours, and 30 minutes after commencing their journey in San Francisco, in the first automobile to successfully transit the North American continent. Their trip expended over 800 US gallons (3,000 l) of gasoline.

After leaving New York City Jackson joined his wife and drove home to Vermont. About 15 miles (24 km) from home his car once again broke down. His two brothers, each driving his own automobile, came to help him get going again. Shortly after returning to the road, both of the brothers' vehicles broke down, and Jackson towed them both home with the Vermont. Upon reaching the threshold of Jackson's garage, the Vermont's drive chain snapped. It was one of the few original parts never replaced during the entire journey.