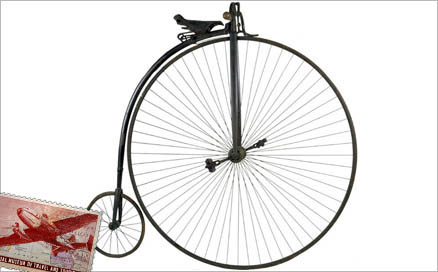 High wheel bicycle of the 'ordinary' or 'spider' type with a 1.422m (56-inch) wheel. This 'Victory' model was assembled in Melbourne from imported components by Henry Bassett & Co. of 4 Elizabeth Street, Melbourne in 1888-89. The frame was nickel-plated. This bicycle was used by Melbourne Bicycle Club member (later President) George Burston on a round-the-world' bicycle journey in 1889-90. Along with his companion H.R. Stokes, Burston left Melbourne on 1 November 1889 and rode to Sydney. The by steamship to Brisbane-Batavia. They rode around Java and then went by ship to Singapore and Calcutta. After riding in India they travelled by ship to Egypt and rode in Palestine and Syria. This was followed by another sea voyage to Turkey, Sicily and Naples. After riding through Italy, Switzerland, Germany and Holland they boarded a ship to Britain and rode extensively in England, Wales, Scotland and Ireland. They returned to Australia via the United States but did not ride there. The journey was recorded in their limited edition book "Round the World on Bicycles' (George Robertson, 1890).

Bicycle painted black with large front wheel and small rear wheel. Both wheels have hard rubber tyres. The pedals are fixed directly to the axle of the front wheel. On top of the large wheel are low metal handlebars with wooden handles and a leather seat. The leather seat sits on a 'cradle spring' mounted on a frame formed from a length of steel tubing. Under the seat is a metal plate (not visible) with the inscription 'MBC' (Melbourne Bicycle Club). Attached to the handlebars is a lever to operate a 'spoon brake' pushing a scalloped piece of iron down onto the front wheel. The bike weighs 21 kg.